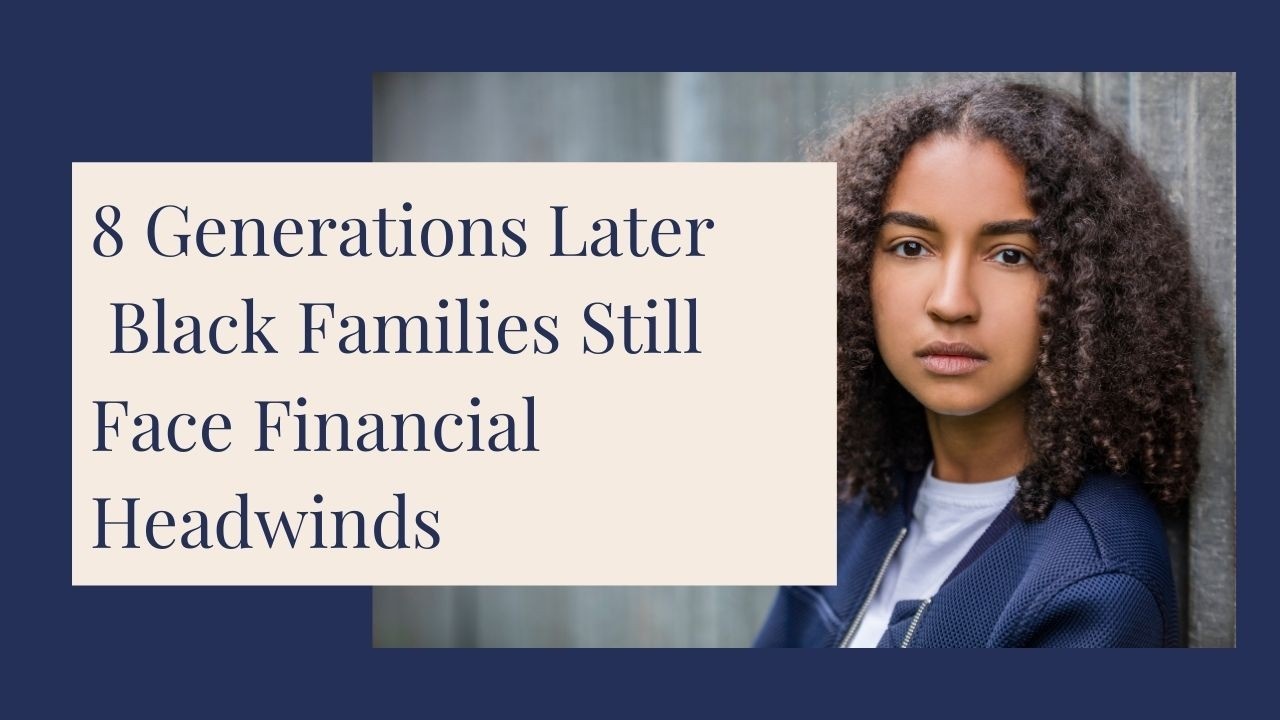 Understanding the wealth gap between Black and White Americans is the first step to overcoming it.

Slavery may have ended over 150 years ago, but its roots continue to prevent Black Americans from achieving wealth equality. Black History Month is a perfect time to reflect on the deep causes of generational wealth inequality.

Black Americans arrived here by force, enslaved, with nothing, not even sovereignty over their own bodies. Eight generations later, they still struggle to build wealth for their descendants.

More than half of white families end up with more wealth than their parents, while only 23 percent of Blacks are able to do the same. White families are twice as likely to receive an inheritance as Black families, and that inheritance is nearly three times as much.

Any attempts at supporting current or future generations is at best an uphill battle. Families struggle to cover expenses, let alone send their kids to college, buy a house, or invest in the stock market.

The wealth gap continues to widen, owing to several factors. Examination of each can help us gain greater understanding of racial inequity in America and inspire us to support policies that create equity for all people.

Homeownership is #1 Indicator of Wealth Equality

The number-one factor is home ownership. This accounts for around 28 percent of the racial wealth gap, according to Thomas Shapiro , Professor of Law and Social Policy at Heller School for Social Policy and Management, Brandeis University.

Racist federal policies such as redlining prevented Blacks from affording decent housing beginning in the 1930s. But the effects of these and other racist policies extend far beyond any given family or neighborhood. Over time, they shut Blacks out from home ownership, which is the main avenue to building generational wealth. Such discrimination has prevented many Black Americans from even putting their hands on the home ownership ladder, let alone climbing up.

The U.S. Federal Housing Administration (FHA) placed Blacks on a wildly different playing field from whites. A well-documented history of mortgage market discrimination guaranteed that Blacks were significantly less likely to be homeowners than whites. During the 1930s, White Americans had access to FHA-insured loans, enabling them to afford a more valuable home in a more desirable area.

Generation over generation, this property’s value continued to grow, adding to the white family’s accumulated wealth. At the same time, the government denied Black families federally insured loans in “negro neighborhoods.” As a result, lenders discriminated against Black families by restricting their access to loans in more desirable neighborhoods.

Inequality in education and job opportunities only deepened the wealth gap rooted in housing discrimination.

Household income is the second most important factor in creating the wealth gap. This accounts for 17 percent of the gap, according to Brandeis University’s Thomas Shapiro.

Over a lifetime, Black Americans can expect to earn up to $1 million less than white counterparts, according to a 2019 McKinsey & Co. study. 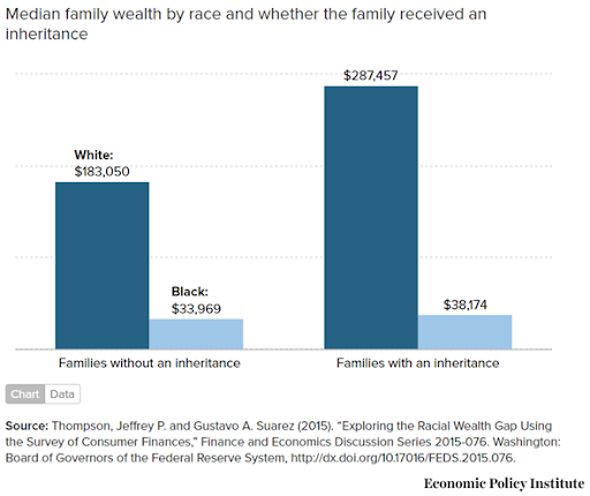 Structural discrimination results in under-representation of Blacks in high-paying jobs.  The deck is already stacked against Blacks who grow up in low-income neighborhoods with substandard schools. Once they make it onto the corporate ladder, many still have to wrestle with white-dominated office cliques, homogeneous board rooms and discriminatory hiring practices.  Investors are also likely to support white startups.  The discrimination starts before an applicant even has a chance to interview for a job.  A study showed that applicants with "Black-sounding" names received 50% fewer callbacks than that of their white counterparts. 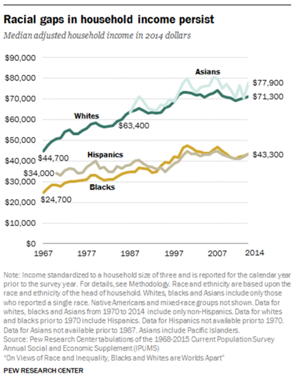 Further exacerbating the situation, Black Americans are less likely to have access to emergency savings. As a consequence, they are more likely to fall behind on their bills and go into debt during times of emergency.

Lower school funding in low-income areas further widens the gap between the haves and have-nots. Wealthy and business-rich areas are able to put much more money into their schools than low-income counterparts. In turn, those higher tax revenues can be funneled right back into the wealthy schools. The average high-poverty district spends 15.6 percent less per student than the average low-poverty district. But in some states, such as Pennsylvania, that gap can be more like 33 percent.

#4 Incarceration Adds Another Layer of Resistance to Building Wealth

People who have been convicted of a crime or imprisoned are more likely to experience poverty. Research shows how criminal convictions “set people up for a lifetime of diminished earnings, helping perpetuate poverty while fueling racial, health and economic inequality,” according to the Brennan Center report.

Incarcerated individuals likely lose what little wealth they may have had in addition to ruining chances of accumulating wealth. Even after they are released, these former inmates will always stay at a lower wealth level than those who were never incarcerated. In fact, imprisonment leads to a 52% reduction in annual earnings with little to no earnings growth for the rest of the imprisoned person’s life. These lost earnings could have been devoted to building wealth by buying a house or paying college tuition. 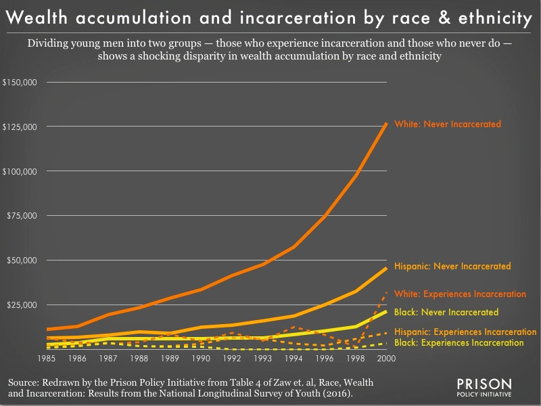 The U.S. justice system is in need of serious reform in light of stark race-based disparities in arrests, sentencing and rates of incarceration.  Although Blacks and whites sell and use drugs at similar rates, Blacks are nearly three times as likely to be arrested on drug-related charges.  Similarly, in 2007, a Black man between the ages of 18 and 25 without a high school diploma was more than three times more likely to be incarcerated than a non-Hispanic white man of the same age and education level. 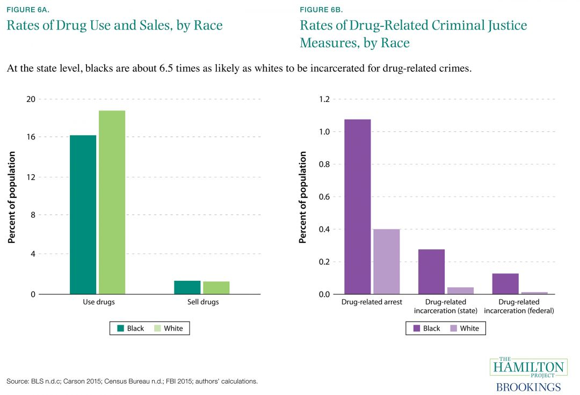 Black families face brutal odds when it comes to building wealth. Hemmed in by financial and social restrictions, Black Americans continue to face an uphill battle in building savings and in paying off debt. No savings and no equity means no inheritance to pass on to future generations.

The public and private sector can do a lot more to support the cause of financial equity. Individuals and families can start by educating themselves about how to build a solid financial future. Awareness is the first step in this education.

We know it can be challenging to balance work, family, friends, exercise, the house, some "me time," and 17 other things you have going on. That's why we launched the Vibrant Money Newsletter!

Stay connected with news and updates! 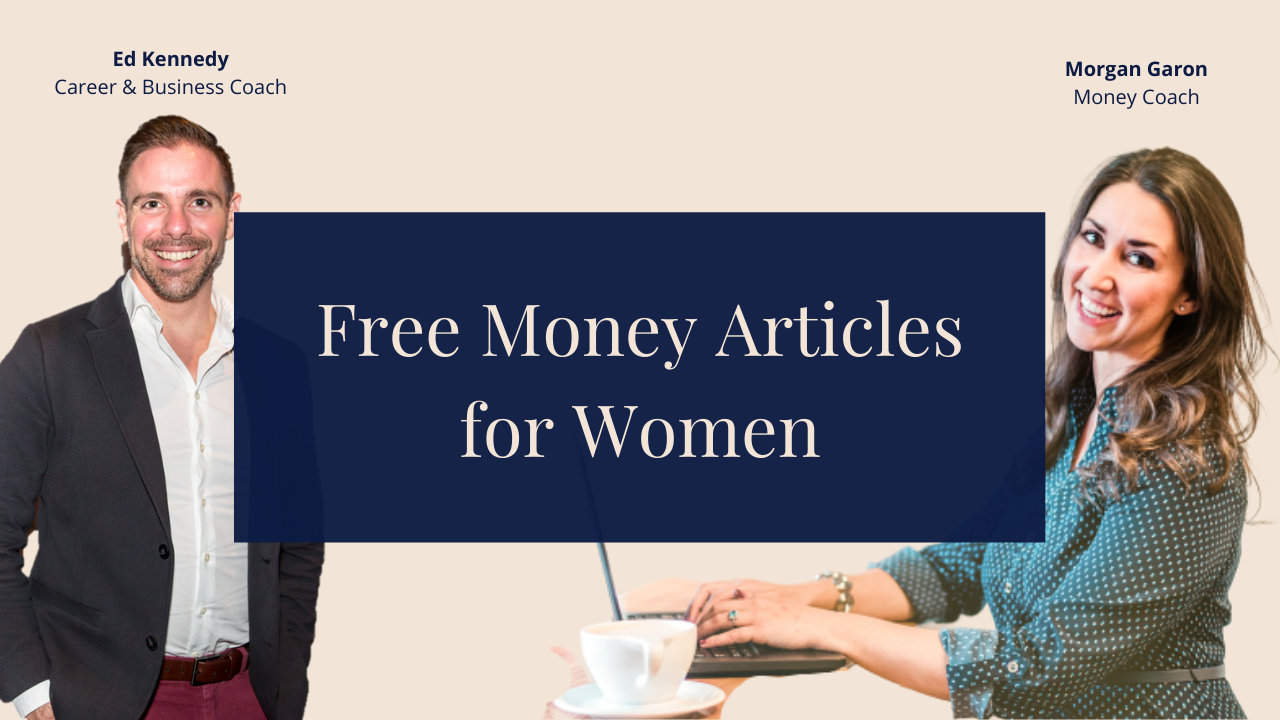 Get a steady diet of personal finance, career development, and small business advice for a woman's perspective.